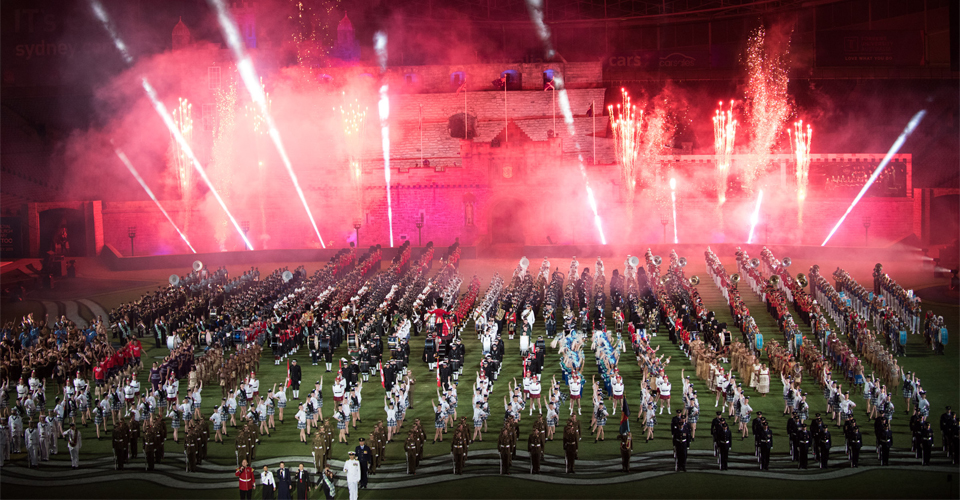 The Royal Edinburgh Military Tattoo ended its 4-show run at Sydney’s ANZ Stadium with over 120,000 people attending the historic production.

The major event featured a record-breaking 1521 cast making it the largest ever production in the Tattoo’s 69-year history.

Australian Producer, Michael Cassel said “The four stadium shows are the culmination of three year’s planning, and I couldn’t be prouder of the stellar team that joined us to deliver these shows – representing a who’s who of the world’s best major event and ceremonies production teams. The performances, from our cast of 1521, were thrilling and the audience enjoyment palpable. I’m most grateful to our Producer and CEO of The Royal Edinburgh Military Tattoo, Brigadier David Allfrey MBE, for his creativity, trust and collaboration. It truly was an experience we will never forget”.

Audiences were treated to a culturally diverse production with 33 musical, folkloric and military groups including 297 of the very best Pipers and Drummers, 630 Military performers, 42 Shetland Fiddlers, 102 Tattoo Dancers, 4 Indigenous Song Men and 195 Cultural Performers from Australia and abroad.

The Sydney 2019 production had 14 nations represented including the UK, Switzerland, France, Tonga, Fiji, Cook Islands, New Zealand and Australia as well as, for the first time ever, acts from Indonesia, Papua New Guinea, Solomon Islands, Samoa and Vanuatu.

This production boasted all the hallmark elements of the world-famous Scottish military and cultural event including traditional crowd favourite songs Auld Lang Syne and Scotland The Brave in addition to contemporary favourites, including a special performance by John Paul Young singing his much-loved classic, Love Is In The Air, joined by the entire cast of the Sydney 2019 Tattoo.

The Royal Edinburgh Military Tattoo was inspired by a simple show called Something About a Soldier performed in 1949 at the Ross Bandstand below Edinburgh Castle. 70 years on, the Tattoo has become a worldwide phenomenon, with a remarkable live audience of 220,000 at Edinburgh Castle each August and a global TV audience of 100 million that continues to captivate the hearts and minds across the globe.

The word tattoo is derived from a Dutch word for the signal played on a drum or bugle to summon soldiers back to their barracks at night. The term evolved in the 18th century to mean a form of evening performances given by military bands.