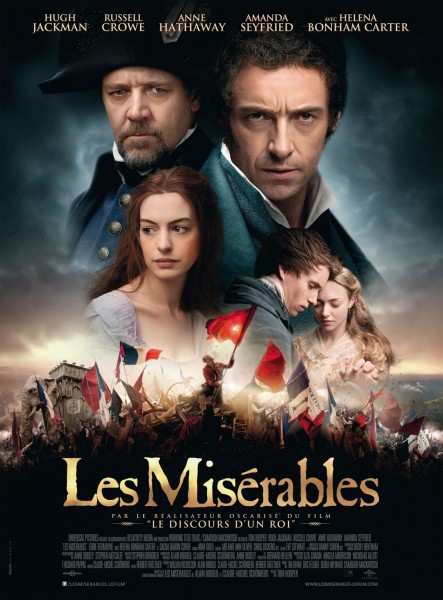 Super-producer Cameron Mackintosh and noted lyricist Herbert Kretzmer open up about the impetus, development, shaping, refining, rehearsing and finalizing of the script and score for the international mega-hit mega-musical LES MISERABLES in a new interview with the Guardian UK.

Among the many fascinating details discussed, Mackintosh recalls that the original version of the epic musical in its early form originally began with Fantine’s factory scene and ended with the barricade scene, among myriad other major differences between what was first seen and heard in Paris in 1980, what Mackintosh envisioned for the piece and the final show as it now stands – to say nothing of the subsequent smash movie musical adaptation, which is in theaters now.

Mackintosh states: “The original concept lacked tension: it began at the factory gates and ended at the barricades, and most of act two concentrated on the love between Cosette and Marius. I tracked down the French creators, Alain Boublil and Claude-Michel Schönberg in Paris; they were surprised I wanted to collaborate with them, rather than taking the rights and reinventing it. Boublil told me that it was while watching the Artful Dodger in my 1978 production of Oliver! that the character of the street urchin Gavroche had come into his head; all the other characters then fell into place. So I was, in a way, godfather to LES MIS.”

In employing Sunday Times drama critic James Fenton into the mix of the creative team – joining Claude-Michel Schonberg and Alain Boublil – Mackintosh humorously recalls, “l asked the librettist, James Fenton, then drama critic of the Sunday Times, if he would be interested in writing the lyrics. He was just off on a three-month trip with his friend, the travel writer Redmond O’Hanlon, seeking headhunters in Borneo; LES MISERABLES must be the first musical begun in a canoe surrounded by crocodiles. Every time he finished a chapter of [Victor] Hugo’s novel, he’d throw it to the crocs to save lugging it through the jungle.”

Mackintosh says of the development of the script and score in rehearsals at the Barbican Theatre: “We went into rehearsal with what we thought was the finished script, but stuff kept being added or edited out. Several songs were suggested by the cast to help develop their characters: ‘Stars’ was written because Roger Allam pointed out that his character, Javert, needed to express why he was so driven. ‘On My Own’ was originally called ‘L’Air de la Misère’ and sung by Fantine; but the words didn’t translate, and we didn’t want Fantine singing two ballads back-to-back before expiring – so we rewrote it and gave it to Eponine.”

Herbert Kretzmer also adds some insight insofar as his collaboration with Fenton on honing the structure and English lyrics for the vastly rewritten LES MISERABLES 2.0, following its previous Paris version from five years earlier: “The two directors, Trevor [Nunn] and John [Caird], pressed me hard to collaborate with Fenton, but I knew I only had five months before rehearsals started: I told them that he who travels fastest travels alone Fenton’s contribution remains in the architecture of the whole show. He discerned, for instance, the need for the young student Marius to express survivor guilt over the death of his friends; and I came up with the song ‘Empty Chairs and Empty Tables’.”

In creating the momentous Act II prayer “Bring Him Home”, Kretzmer was at a loss – at first.

He remembers: “I consider myself an atheist – but you don’t have to believe in what you’re writing, so long as you believe with every sinew that your characters believe it: the theology in the lyrics was written with the utmost sincerity. There was one dark cloud that dogged me, though: the song sung by Valjean to the sleeping Marius at the barricades. We code-named this ‘Night Thoughts’ to reflect the resentment, anger and jealousy that Valjean would feel as he contemplated this usurper. Yet the music I was given was ridiculously at odds – a stately, hymn-like progression of three ascending notes. The directors came round to discuss it and, as they left at 2am, Caird said, ‘Sounds like a prayer to me.’ The minute he said that, every door seemed to fly open. I was freed from delving into the murkier corners of Valjean’s mind and could instead give his blessing to a young couple in love. I stood for the rest of that night in my study and by 5am, ‘Bring Him Home’ was written – 17 days before the show opened.”

How far LES MISERABLES has come – and, with today’s announcement of a 2014 Broadway revival (it is still running in the West End as the longest-running musical there), how far it still can go!