How we made Les Misérables 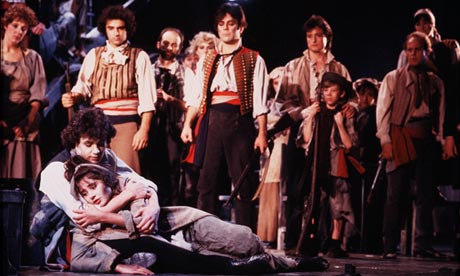 Interviews by Anna Tims
The Guardian

The producer, Cameron Mackintosh, and librettist of the original 1985 show, Herbert Kretzmer, recall an adventure that began in a canoe surrounded by crocodiles, and ended with an all-night writing marathon.

In 1982, a young Hungarian director, Peter Farago, brought me the original French concept album of Les Misérables. He said that anyone who was mad enough to have turned TS Eliot’s cat poems into a musical would surely take on the challenge. He wanted to direct any production himself; I said I’d refuse to listen to it unless I could choose the director myself. A week later, I listened to it alone and, even though I don’t speak good French, knew it would be right up Trevor Nunn’s street. Nunn agreed, but only if he could do it with the Royal Shakespeare Company and co-direct with John Caird.

The original concept lacked tension: it began at the factory gates and ended at the barricades, and most of act two concentrated on the love between Cosette and Marius. I tracked down the French creators, Alain Boublil and Claude-Michel Schönberg in Paris; they were surprised I wanted to collaborate with them, rather than taking the rights and reinventing it. Boublil told me that it was while watching the Artful Dodger in my 1978 production of Oliver! that the character of the street urchin Gavroche had come into his head; all the other characters then fell into place. So I was, in a way, godfather to Les Mis.

Jonathan Miller had just staged an extraordinary version of Verdi’s Rigoletto at the London Coliseum, transplanting the action to the mafia world of Lower Manhattan. It caused a sensation and drew in audiences who had never been to an opera house before. l asked the librettist, James Fenton, then drama critic of the Sunday Times, if he would be interested in writing the lyrics. He was just off on a three-month trip with his friend, the travel writer Redmond O’Hanlon, seeking headhunters in Borneo; Les Misérables must be the first musical begun in a canoe surrounded by crocodiles. Every time he finished a chapter of [Victor] Hugo’s novel, he’d throw it to the crocs to save lugging it through the jungle.

Fenton was also a poet and, although I regularly sent him to France to liaise with Boublil and Schönberg, he’d go off on his own. Things moved very slowly; it was a two-year struggle. A lot of his words were brilliant, but they were poetry – not the sort of language you could act out a character with. Eventually I realised we would never get a finished script and Herbert Kretzmer’s name flashed into my head. We already had the structure and narrative of the show; now it was Herbert’s job to find it a voice.

We went into rehearsal with what we thought was the finished script, but stuff kept being added or edited out. Several songs were suggested by the cast to help develop their characters: Stars was written because Roger Allam pointed out that his character, Javert, needed to express why he was so driven. On My Own was originally called L’Air de la Misère and sung by Fantine; but the words didn’t translate, and we didn’t want Fantine singing two ballads back-to-back before expiring – so we rewrote it and gave it to Eponine.

It was a dagger in my heart when the reviews panned it. I’d rushed to buy the early-morning editions, and the first review I saw was Jack Tinker in the Mail, calling it “The Glums”. I had my usual post-production lunch with the team, and we all felt we’d been to a funeral.

I rang the box office to gauge the reaction and the lines were jammed; they said they had never been so busy. The audiences had been euphoric. But that has been the story of Les Misérables ever since the novel was published: it sold in barrowloads, yet the critics hated it. I’m as surprised as anyone by its longevity; its strength lies in Hugo’s observation of character, which crosses generations and cultures. And in Schönberg’s music, one of the greatest musical scores ever written.

Cameron had asked me to visit him in 1984, after I wrote asking him to back an old musical of mine, Our Man Crichton, which I wished to revive. He didn’t want to, but he had admired the show’s lyricism. As I was leaving his office he asked what other songs I’d written. I named two, and he leapt about the carpet like a leprechaun, declaring they were two of his favourites.

Nine months later, the call came. I was so keen to work on a big musical that I’d have accepted if it had been Three Blind Mice. At the time, I was a journalist on the Daily Mail. I begged extended leave, holed up in my house and barely emerged for five months. Lyrics and journalism are a good match: both are about manipulating language under constraint. Bars of music can’t be negotiated.

The two directors, Trevor and John, pressed me hard to collaborate with Fenton, but I knew I only had five months before rehearsals started: I told them that he who travels fastest travels alone Fenton’s contribution remains in the architecture of the whole show. He discerned, for instance, the need for the young student Marius to express survivor guilt over the death of his friends; and I came up with the song Empty Chairs and Empty Tables.

The word “translation” makes me shiver. Words can resonate in one culture but not another, so I read the novel and then told the story in my own way. Castle on a Cloud had the line “There is a prince on the road” in the French version, but it seemed to me a young orphan would be dreaming of a mother-figure rather than a lover. Cameron had commissioned Claude-Michel to extend the musical by a third, so there were also long episodes to fill. There was only one song that I wrote first and which Schönberg then set to music: Stars, in which Javert swears revenge on Valjean.

I consider myself an atheist – but you don’t have to believe in what you’re writing, so long as you believe with every sinew that your characters believe it: the theology in the lyrics was written with the utmost sincerity. There was one dark cloud that dogged me, though: the song sung by Valjean to the sleeping Marius at the barricades. We code-named this “Night Thoughts” to reflect the resentment, anger and jealousy that Valjean would feel as he contemplated this usurper. Yet the music I was given was ridiculously at odds – a stately, hymn-like progression of three ascending notes. The directors came round to discuss it and, as they left at 2am, Caird said: “Sounds like a prayer to me.”

The minute he said that, every door seemed to fly open. I was freed from delving into the murkier corners of Valjean’s mind and could instead give his blessing to a young couple in love. I stood for the rest of that night in my study and by 5am, Bring Him Home was written – 17 days before the show opened.

I returned to the Mail, but then it became clear that the show had a fairly certain future: I was able to give up my day job at 61. Les Misérables has brought me my London house and my wife, whom I met at the opening-night party in New York. I often marvel at how those few feet between Cameron Mackintosh’s sofa and his door changed my life.