‘Les Misérables’ Coming Back to Broadway Next Year 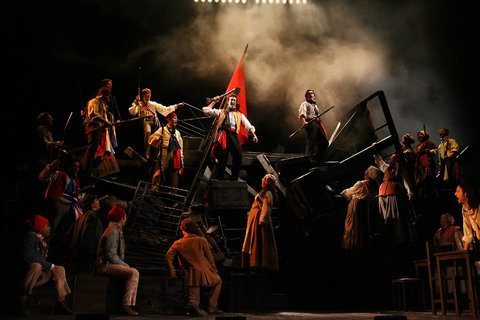 A new stage version of the blockbuster musical “Les Misérables” will open on Broadway in March 2014, the producer Cameron Mackintosh said on Tuesday, in an attempt to capitalize on the popularity of the Oscar-nominated film and restore luster to the show in New York after a short-lived 2006 revival that even Mr. Mackintosh now admits was ill-conceived.

This latest “Les Misérables” will be missing a notable design element – a revolving turntable – that was used in the original Broadway production, which ran from 1987 to 2003, and the earlier revival, which closed in January 2008. The new version, which has been touring the United States for two years, also features redesigned scenery based on Victor Hugo’s paintings for his original novel, as well as new orchestrations that, as Mr. Mackintosh said, “get away from the crude electric-piano sound of the original.” And the staging is also different, with an emphasis on the gritty lot of the 19th century downtrodden in France; the directors are Laurence Connor and James Powell. (Trevor Nunn and John Caird won Tonys for their direction in 1987.)

Mr. Mackintosh is counting on these changes – plus the interest in the film, which has grossed nearly $400 million globally so far – to be enough to counter the risk of oversaturation of the “Les Misérables” brand.

“What we’re counting on is that people who loved the movie will now really want to see ‘Les Misérables’ on stage, and people who loved the original musical were swept up by the film and say, ‘I can’t wait for another chance to see it onstage again,'” said Mr. Mackintosh, the veteran producer of hits like “Cats” and the long-running “Phantom of the Opera.”

He has not conducted any market research or surveys of moviegoers to support his theory of demand for “Les Misérables” back to Broadway, but noted that tickets sales for the musical’s current tour only increased this winter as the movie was released. The tour grossed a strong $3.5 million for three weeks in Washington in December when the film first opened, Mr. Mackintosh noted, and the current advance ticket sales for the London production have jumped in recent months by roughly 20 percent, to 6 million pounds (or about $9 million).

Still, Mr. Mackintosh has had misfires too. He acknowledged that he brought “Les Misérables” back to Broadway the last time too soon after the original closed, and said “in hindsight I wish I hadn’t done that, because coming back to New York in 2014 would be much more exciting without the last revival.”

“But there is no such thing as certainty in the theater, other than that you can make a mistake,” Mr. Mackintosh said.

He was only willing to concede so much on “Les Misérables,” however. He strongly defended the live singing in the “Les Misérables” movie, which its publicists ballyhooed as an artistic feat. Some critics and bloggers had “so what?” reactions to the live singing, noting that it is common in theater, while others felt that recorded tracks might have bolstered the vocal performances of Hugh Jackman (as the hero Jean Valjean) and Russell Crowe (as the police official Javert).

“Having the actors switch their voices between prerecorded and live, and having them sing in prerecorded sessions before they even filmed the given scene, would have lacked immediacy and power,” Mr. Mackintosh said. “People who think we could have done it any other way just really don’t know how ‘Les Misérables’ works.”

The success of the film version – which has been nominated for eight Academy Awards, including best picture – has emboldened Mr. Mackintosh to consider a musical-to-movie adaptation of “Miss Saigon,” which ran on Broadway from 1991 to 2001. He said that project was “down the track a good bit because I have a great deal else to focus on,” but indicated that he was putting thought into directors and screenwriters for a “Saigon” film.

But first comes “Les Misérables,” which will run at a Shubert theater to be named later – and which Mr. Mackintosh hopes will run longer than the 15 months of the last revival. He said he was starting to think about casting, and added that he didn’t plan to cast any movie or television stars, whom producers often turn to for musical revivals. Asked if Mr. Jackman, a Tony Award-winning theater actor as well as a movie star, might do a guest appearance in “Les Misérables” on Broadway, Mr. Mackintosh acknowledged that his billing “would sell a few tickets.”

“If Hugh said he wanted to do it for a week or two, that’d be fine by me,” he said. “But that’s not why we’re doing this. ‘Les Misérables’ is the star, the material is the star, and what you want to do is find star performances from people who want to be in it – like we had with the movie.”