Les Misérables confirmed to open in Brisbane in November 2015 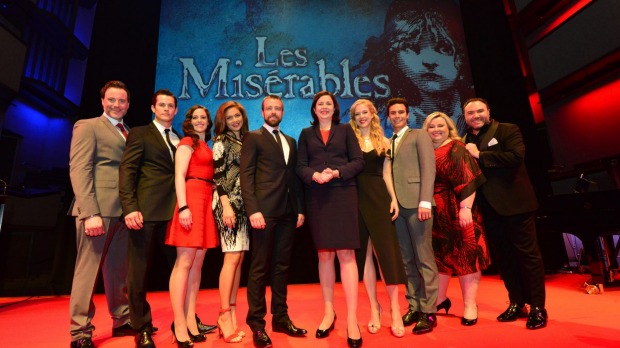 “I welcome LES MISÉRABLES to Queensland and am certain that audiences will not miss their chance to see this much-loved musical in a new production at QPAC,” the Premier said.

Having celebrated triumphant seasons in Melbourne, Perth and currently playing in Sydney, Cameron Mackintosh is thrilled to be able to bring this new production to Brisbane.

“I’m delighted that the wonderful original cast of my acclaimed new production of LES MISÉRABLES will all be coming to open the Brisbane season in November. Brisbane has always been a tremendously responsive home to my musical productions so I am particularly proud and delighted that this extraordinary Australian cast has agreed to stay together for this season which coincides with the 30th anniversary of the original London production still playing to packed houses at the Queens Theatre in Shaftsbury Avenue. I have always found that the best Australian performers are the best in the world and this Company is one of the finest I have ever had.” Cameron Mackintosh said.

One of the world’s greatest musicals, this new production of the much-loved blockbuster features glorious modernised staging, orchestrations and dazzlingly reimagined scenery inspired by the paintings of Victor Hugo. This new version of LES MISÉRABLES is not to be missed. You might think you know the show – but you’ve never seen it like this!

‘A dynamic, enthralling experience… this new production will elevate emotions in ways previously unknown’ – Daily Telegraph, Sydney
‘Les Mis will knock you for six’ – Sydney Morning Herald, Sydney
‘Five stars… a musical and theatrical triumph … Les Mis is master of the house once more’ – Herald Sun, Melbourne
‘Everything you could want – vocal splendour and emotional power, dynamic staging and a propulsive dramatic vision… will hold a new generation of fans in thrall’ – The Age, Melbourne
“A defining moment in Australian music theatre.” – Broadway World

Hailed by The Australian as ‘an ensemble of star quality’, the cast has earned heartfelt adoration for their spine tingling and flawless performances. The original Australian production of LES MISÉRABLES saw Cameron Mackintosh launch the careers of some of Australia’s biggest stars, including Marina Prior and Anthony Warlow. For this newest production, he has once again assembled a cast poised to follow the same path.

Set against the backdrop of 19th-century revolutionary France, LES MISÉRABLES is a much loved blockbuster musical which has been seen by over 70 million people worldwide in 42 countries and in 22 languages, LES MISÉRABLES is undisputedly one of the most popular musicals of all time. Having won more than 100 major awards around the world it has been hailed as the most stirring, moving musical ever. Based on Victor Hugo’s classic novel, it is an epic and uplifting story about the survival of the human spirit. The magnificent score of LES MISÉRABLES includes the classic songs “I Dreamed a Dream”, “On My Own”, “Stars”, “Bring Him Home”, “Do You Hear the People Sing?”, “One Day More”, “Empty Chairs at Empty Tables”, “Master of the House” and many more.

Tickets on sale Thursday 21st May