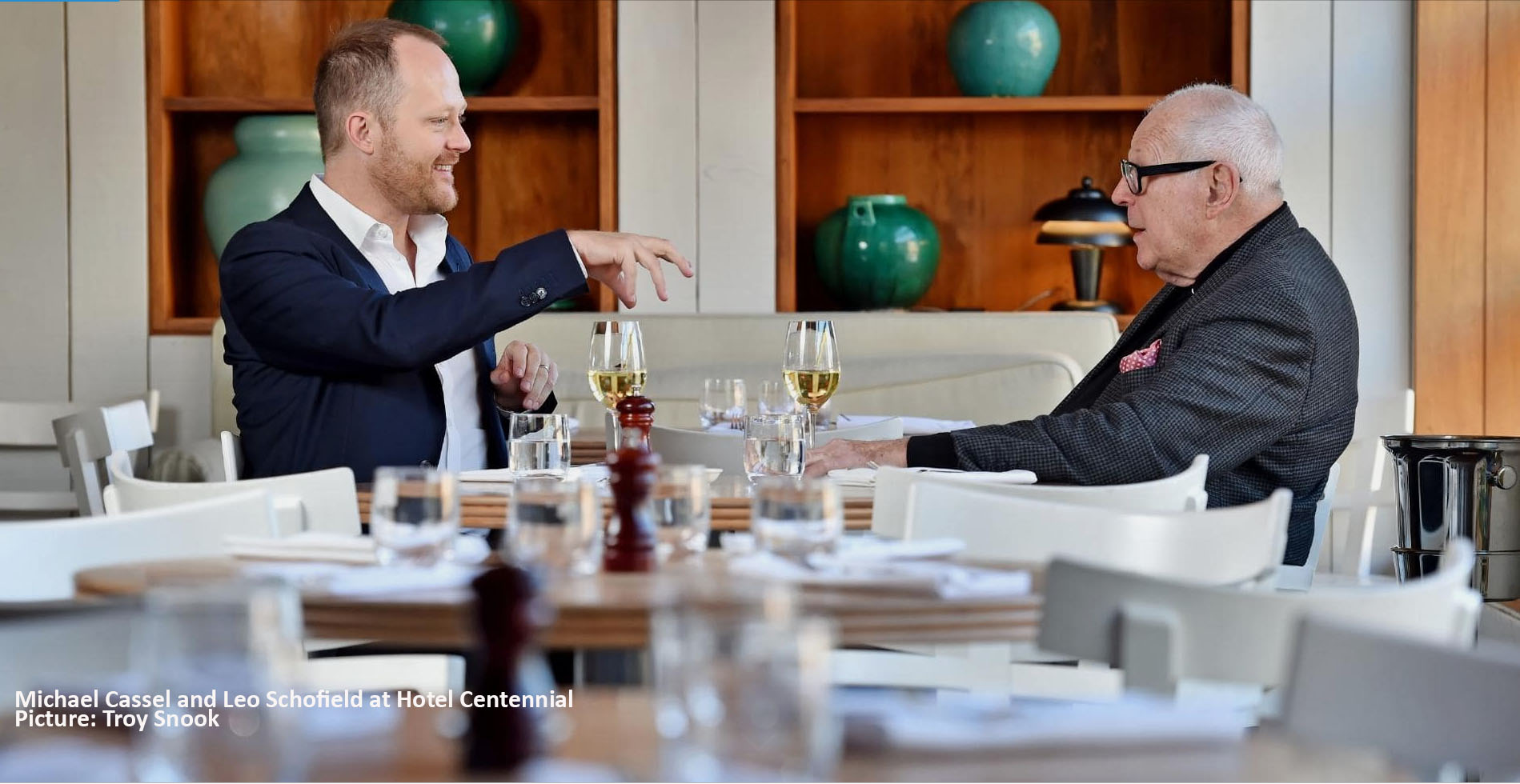 Were this article to appear in Variety, that venerable American showbiz newspaper of record, famous for its unique shorthand jargon or slanguage, the headline would probably run: “KIAMA KID BOFFS BROADWAY.”

Readers of Variety would understand it was a success story, and indeed it is.

It would be about a young man from a small town who, from a very early age, dreamed of a career in the theatre and has spent the first 40 years of his life in happy and unwavering pursuit of that dream.

He’s now one of the most successful theatrical producers in Australia with a burgeoning business, a staff of 40 and an international reputation.

That would be Michael Cassel, who right now is producing, in Australia and elsewhere, three of the biggest shows around, Hamilton, Disney’s The Lion King and Harry Potter and the Cursed Child from his offices in Potts Point.

Hamilton, the rap musical based on the life of Alexander Hamilton, one of America’s founding fathers, is the hottest ticket on Broadway, wreathed in critical laurels and freighted with awards galore. On the subject of winning the rights to produce this plum show in 2021, Cassel is rightly proud.

He described securing the rights to open in Sydney as a “real milestone for me personally.

“Cameron Mackintosh sent me a text following the opening of Hamilton’s Broadway transfer in 2016 and it said ‘you have to come and see this. I’ve not seen anything in the theatre quite like it.’ And I have to agree, there isn’t.”

The return of the Royal Edinburgh Military Tattoo, the biggest outdoor spectacle this side of the Calgary Stampede is also in the works over three days in October. In the seven decades of its existence, the Tattoo has thrilled millions of visitors to Scotland. When it was first seen in Australia, in the now demolished Sydney Football Stadium, it pulled in nightly audiences of 25,000 spectators.

Just what precise form the young Cassel’s teen dream was to take was uncertain, although he probably never imagined he’d be overseeing theatrical properties of this magnitude.

“From an early age, my sister and I used to dream up family entertainment. When it came to putting on a show, I was always the ringmaster.” Think Judy Garland and Mickey Rooney in Babes in Arms. “Initially though, I wanted to be an actor. I started to do drama when I was seven. I also began learning the piano – I loved playing the piano – just for fun.”

Minnamurra Primary School was just down the street from the Cassel residence. “I did what every primary school student does – you did drama classes, you sang in the choir, you’d play the recorder to annoy your parents. I was school captain and I organised a production of Joseph and the `Amazing Technicolour Dream Coat. That was the start my of amateur career.”

Coincidentally that very same show, staple of amateur dramatic troupes world-wide, marked the start of two other careers, those of its begetters Tim Rice and the ubiquitous Andrew Lloyd Webber.

“The following year Mum and Dad took me to see the same show in Sydney.”

As a result of exposure to this professional staging, another career awaited him, that of serial letter writer.

“I used to love writing letters, and still do. When I was seven I wrote a letter to Ray Martin. He wrote back saying they we’re not looking for a co-host of the Midday Show at the moment.”

“I also wrote to Jan Russ, the casting director for Neighbours asking for a job and she wrote back advising me to go find an agent.”

Next on his hit list was entrepreneur Harry M. Miller.

“I had seen Harry’s production of Jesus Christ Superstar, the arena production with John Farnham, Jon Stevens and Kate Ceberano.

“I was blown away by the score and by what music theatre could be. I read the souvenir program so often that I could repeat the copy, and even remember the pagination.” He was clearly stagestruck.

“I realised that I could have another role in the theatre. I didn’t have to be an actor. I could be a producer. I thought that was pretty cool as producers have fingers in the pie in so many other areas. So I wrote Harry a letter. I was 12. In Year 6.

“Dear Harry. I’ve decided I want to be a producer …”

Harry wrote back: “Dear Michael. I suggest you go to high school first. Good luck with your career.”

“I thought ‘bugger you’. So off I went to Kiama High School. We had an active music program there but they weren’t doing an end of-year production.”

Cassel soon changed that. “We ended up doing Joseph again. I orchestrated and recorded all the music on a backing track.”

Buoyed by the success of this modest effort, Cassel looked forward to a more challenging enterprise. “In January 1995, I thought ‘What can I produce next? Everybody loves Christmas so I decided to do a carols by candlelight concert.”

With 12 months to get his act together, Cassel swung into action and wrote another letter, this one to the Mayor of Kiama requesting sponsorship.

Anyone meeting Cassel for the first time, over lunch at the Centennial Hotel in Woollahra, would be charmed. He is stylish, bright-eyed and radiates a youthful enthusiasm. He’s modest, articulate.

Today he is turned out in a snappy blue linen blazer, slim pants, technicolour socks with a broad smile as an attractive accessory.

He continues his career history. Not to be confined within a rectilinear school assembly hall, he sought a more impressive venue that mirrored his ambitions. “Down in Kiama they have this great sporting field. It’s where they play soccer and footy and it has a great background, a dramatic cliff face.” GAME ON!

“I rounded up an orchestra, found a musical director and I just wrote to everyone. I got lots of modest donations. The biggest cheque I got was $500. Everything was sponsored. The electricity generator was sponsored. I wanted Santa to arrive by helicopter and I got someone to sponsor the helicopter. I think people who got my letter just thought ‘Let’s get this kid off our backs. I hoped I’d get $300 in cash and we got $3000.

“I thought ‘this is fun, I like this more than school.’”

And so it has proved to be. Great fun.

“The following year we did it again. I wrote to Alan Jones who had a property in Jamberoo. He’s a big media personality, I’ll invite him to come and host it for me.”

Jones responded and a meeting was arranged and up rolls this 15-year-old. “So you want to be a producer.

“Then you should meet my agent, Harry M. Miller. He’s a producer.”

“I said ‘well I’ve already written to Mr. Miller and he told me I ought to go to high school first.’”

This time Miller’s advice was more encouraging. A meeting was arranged and the stagestruck aspirant became the eager intern.

“Harry told me if I wanted to be a producer I should come to work with him.”

So during school holidays, between Year 10 and Year 12, Cassel would take the train from Kiama to Sydney to Miller’s offices in Cathedral Street and work as a gopher. Unpaid of course.

“I’d tidy up the office, file things, take dictation, transcribe tapes. I thought it was the best thing ever,” recalls Cassel. “Harry maintained that the only way to learn to be a producer was to actually do it, to understand all aspects of the business, marketing, production, financial, legal.

“And Mum and Dad thought it was a great arrangement. Great, that’s Michael taken care of.”

Cassel is now a dad himself, married to Camille and with two children (“I don’t know how to have four kids two are a handful”), a son Vaughan, 4, and a daughter Eveleigh, 8.

His daughter seems to have inherited her father’s ambition and would appear to already be following closely in her father’s entrepreneurial footsteps.

She told him she’s either going to rule the world or become president of the United States. “She’s already suggested a name change from Michael Cassel Group to The Cassel Group,” says Cassel. “I told her, when you’re old enough to run it, it’s all yours.”