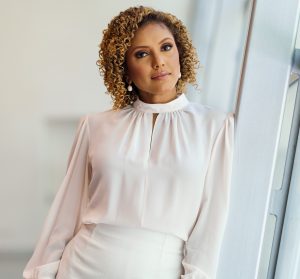 Born in Sri Lanka, Karina’s family’s businesses which had been passed on for generations were burned down during the Colombo riots of 1983. The family left behind the violence of the country’s civil war to begin a new life in Australia.

It was this experience that would profoundly shape Karina as a reporter along with her perspective on world issues and current affairs.

Karina grew up in Perth and graduated from the Western Australian Academy of Performing Arts with a       Broadcast major. After University, Karina moved to the United Kingdom where she worked at the BBC as a producer on programs such as HARDtalk, and also travelled on assignment to the USA.

After her return to Perth, Karina began reporting for the ABC. At just 27 years old, Karina was appointed to present the ABC’s flagship 7pm News in Western Australia. She was one of the youngest prime time anchors in the country.

Karina then co-hosted ABC News Breakfast in Melbourne with Michael Rowland, before spending five years as Queensland’s 7pm News presenter, based in Brisbane.

Since 2018, Karina has been based in Sydney, hosting Evenings, a national prime time program on the ABC News Channel.

Karina has interviewed Prime Ministers, politicians, authors and celebrities. Karina was one of the last journalists to interview Bryce Courtenay before his death about the inconsistencies in his life story.

Yet it’s the stories of ordinary people that give Karina the greatest sense of pride, from those who lost their businesses in the 2011 Queensland floods to more recently a refugee, Khalid Amiri, who escaped the Taliban in Afghanistan and has settled in Melbourne on a humanitarian visa.

The pandemic has been a huge focus of Karina’s work for the last two years, and particularly its impact on the everyday lives of Australians and people around the world. A bright spot in the uncertain time was her appearance on Play School, fulfilling a lifelong dream of being on the children’s program.

No stranger to the daily adrenalin of live television, Karina has anchored rolling coverage for major events including terrorist attacks, flood emergencies, bushfires and the death of Prince Philip.

When not immersed in the world of news and public affairs, Karina has a passion for sport. From rugby to cricket, if there’s a competition on, Karina is a keen supporter.

Karina is also passionate about the arts, whether it’s the latest exhibition, ballet or theatre production.

Karina has a love of food, fostered from a young age, where sharing meals and spending time in the kitchen as a family were central activities.