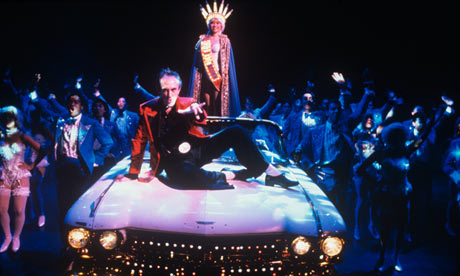 Story by The Guardian
Written by: Matt Trueman

It has been 25 years since Claude-Michel Schönberg and Alain Boublil saw their Vietnam war musical Miss Saigon staged for the first time. Now it could be set to follow the lead of their other mega-hit, Les Misérables, after producer Cameron Mackintosh revealed that a new London production was in the pipeline – and that a film version was a possibility.

“I’m going to restage Miss Saigon in London as soon as I find a theatre,” the producer told the Philippine Star. “We have started preliminary auditions.”

Initial auditions in Manila have apparently left six actors in contention for roles. “When we did the show in London 25 years ago, we spent over a year looking for the cast,” Mackintosh said. That search uncovered Lea Salonga, then only 18, who won best actress at both the Olivier and Tony awards for her performance as Kim.

“I hope that in the next 18 months it would be back in London. The new version has just opened here in Japan, and it’s a phenomenal success. It’s going to be a different production, but the same great Miss Saigon,” said Mackintosh.

The original West End production, which was directed by Nicholas Hytner, ran for 10 years, racking up 4,264 performances, the most of any production at the Theatre Royal, Drury Lane. A subsequent Broadway transfer picked up ten Tony awards, though the production wasn’t without its controversies. Jonathan Pryce, who wore eye prostheses and fake tan to play the Engineer, was initially forbidden to reprise the role in New York by the Actors’ Equity Association, which described his casting as a Eurasian character “an affront to the Asian community.” Despite sizable advance bookings, Mackintosh threatened to pull the show.

The producer, who makes a cameo appearance alongside Schönberg and Boublil in Tom Hooper’s film of Les Misérables, also confirmed he was mulling the possibility of a cinematic adaptation. “It’s possible,” he said. “But we will have to wait and see how successful Les Mis will be as a film.”