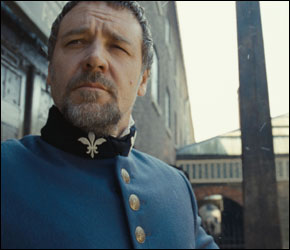 As a faithful rendering of a justly beloved musical, “Les Miserables” will more than satisfy the show’s legions of fans. Even so, director Tom Hooper and the producers have taken a number of artistic liberties with this lavish bigscreen interpretation: The squalor and upheaval of early 19th-century France are conveyed with a vividness that would have made Victor Hugo proud, heightened by the raw, hungry intensity of the actors’ live oncamera vocals. Yet for all its expected highs, the adaptation has been managed with more gusto than grace; at the end of the day, this impassioned epic too often topples beneath the weight of its own grandiosity.

The Universal release will nonetheless be a major worldwide draw through the holidays and beyond, spelling a happy commercial ending for a project that has been in development for roughly a quarter-century. Since its 1985 London premiere, the Cameron Mackintosh-produced tuner (adapted from Alain Boublil and Claude-Michel Schoenberg’s French production) has became one of the longest-running acts in legit history, outpaced only by “The Phantom of the Opera” and “Cats.” “Les Miserables” has aged far more gracefully than those two ’80s-spawned perennials, owing largely to the lush emotionalism of Schoenberg’s score, the timeless sentiments articulated in Herbert Kretzmer’s lyrics, and the socially conscious themes, arguably more relevant than ever, set forth in Hugo’s much-filmed masterwork.

In an intuitive yet bold scripting decision, scribes William Nicholson, Boublil, Schoenberg and Kretzmer have fully retained the show’s sung-through structure, with only minimal spoken dialogue to break the flow of wall-to-wall music. Not for nothing is “Do You Hear the People Sing?” the piece’s signature anthem; song is the characters’ natural idiom and the story’s lifeblood, and the filmmakers grasp this idea firmly enough to give the music its proper due. Even with some of the lyrics skillfully truncated, this mighty score remains the engine that propels the narrative forward.

In visual terms, Hooper attacks the material with a vigor and dynamism that suggest his Oscar-winning direction on “The King’s Speech” was just a warm-up. At every turn, one senses the filmmaker trying to honor the material and also transcend it, to deliver the most vibrant, atmospheric, physically imposing and emotionally shattering reading of the show imaginable. Yet this mammoth production can feel as enervating as it is exhilarating; blending gritty realism and pure artifice, shifting from arias of almost prayerful stillness to brassy, clunkily cut-together ensemble numbers, it’s an experience whose many dazzling parts seem strangely at odds.

The film’s ambition is immediately apparent in a muscular opening setpiece that hints at the scope of Eve Stewart’s production design: In 1815 Toulon, France, a chain gang labors to tow a ship into port. Among the inmates is Jean Valjean (Hugh Jackman), overpunished for having stolen a loaf of bread nearly 20 years earlier, now being released on parole by Javert (Russell Crowe), the prison guard who will persecute him for years to come. With his scraggly beard, sunburnt skin and air of wild-eyed desperation, Valjean looks every inch a man condemned but, through the aid of a kind bishop (Colm Wilkinson, who originated the role of Valjean in 1985), vows in his soul-searching number “What Have I Done?” to become a man of virtue.

In this and other sequences, Hooper (again working with “Speech” d.p. Danny Cohen) opts to bring the camera close to his downtrodden characters and hold it there. It’s a gesture at once compassionate and calculated, and it’s never more effective than when it touches the face of Fantine (Anne Hathaway), a poor, unwed mother ejected from Valjean’s factory into the gutters.

Hathaway’s turn is brief but galvanic. Her rendition of “I Dreamed a Dream,” captured in a single take, represents the picture’s high point, an extraordinary distillation of anguish, defiance and barely flickering hope in which the lyrics seem to choke forth like barely suppressed howls of grief. Hathaway has been ripe for a full-blown tuner showcase ever since she gamely sang a duet with Jackman at the Oscars in 2009, and she fulfills that promise here with a solo as musically adept as it is powerfully felt.

This sequence fully reveals the advantages of Hooper’s decision to have the thesps sing directly oncamera, with minimal dubbing and tweaking in post. As carefully calibrated with the orchestrations (by Anne Dudley and Stephen Metcalfe) in Simon Hayes’ excellent sound mix, the vocals sound intense, ragged and clenched with feeling, in a way that at times suggests neorealist opera. A few beats and notes may be missed here and there, but always in a way that serves the immediacy of the moment and the truth of the emotions being expressed, giving clear voice to the drama’s underlying anger and advocacy on behalf of the poor, marginalized and misunderstood.

Hathaway’s exit leaves a hole in the picture, which undergoes a tricky tonal shift as Valjean rescues Fantine’s young daughter, Cosette (Isabelle Allen), from her cruel guardians, the Thenardiers. Inhabited with witchy, twitchy comic abandon by Sacha Baron Cohen and Helena Bonham Carter, not terribly far removed from the grotesques they played in “Sweeney Todd,” these innkeepers amusingly send up their venal, disreputable and utterly unsanitary lifestyle in “Master of the House,” a memorably grotesque number that also marks the point, barely halfway through, when “Les Miserables” starts to splutter.

As it shifts from one dynamically slanted camera angle to another via Melanie Ann Oliver and Chris Dickens’ busy editing, the picture seems reluctant to slow down and let the viewer simply take in the performances. That hectic, cluttered quality becomes more pronounced as the story lurches ahead to the 1823 Paris student uprisings, where the erection of a barricade precipitates and complicates any number of subplots. These include Javert’s ongoing pursuit of Valjean, their frequent run-ins seeming even more coincidental than usual in this movie context; the blossoming romance between Cosette (now played by Amanda Seyfried) and young revolutionary leader Marius (Eddie Redmayne); and the noble suffering of Eponine (Samantha Barks), whose unrequited love for Marius is heartbreakingly exalted in “On My Own.”

As the characters’ voices and stories converge in the magisterial medley “One Day More,” the frequent crosscutting provides a reasonable visual equivalent of the nimble revolving sets used onstage. Yet even on this broader canvas, the visual space seems to constrict rather than expand, and the sense of a sweeping panorama remains elusive; from there, the film proceeds through an ungainly pileup of gun-waving mayhem before a powerful surge of emotion in the suitably grand finale.

Devotees of the stage show will nonetheless be largely contented to see it realized on such an enormous scale and inhabited by well-known actors who also happen to possess strong vocal chops. The revelation here is Redmayne, who brings a youthful spark to the potentially milquetoast role of Marius, and who reveals an exceptionally smooth, full-bodied singing voice, particularly in his mournful solo “Empty Chairs at Empty Tables.”

Jackman’s extensive legit resume made him no-brainer casting for Valjean, and he embodies this sinner-turned-saint with the requisite fire and gravitas. Whether he’s comforting the dying Fantine or sweetly serenading the sleeping Cosette (in the moving “Suddenly,” a song written expressly for the screen), Jackman projects a stirring warmth and nobility. He’s less at home with the higher register of Valjean’s daunting two-octave range; there’s more strain than soul in his performance of “Bring Him Home,” usually one of the show’s peak moments.

Crowe reveals a thinner, less forceful singing voice than those of his co-stars, robbing the morally blinkered Javert of some dramatic stature, although his screen presence compensates. Barks, a film newcomer wisely retained from past stagings, more than holds her own; Seyfried (who previously flexed her musical muscles in “Mamma Mia!”) croons ever so sweetly as the lovely, passive Cosette; Aaron Tveit cuts a dashing figure as the impulsive student revolutionary Enjolras; and young Daniel Huttlestone makes a delightful impression as the street urchin Gavroche, bringing an impish streak of energy to the proceedings.