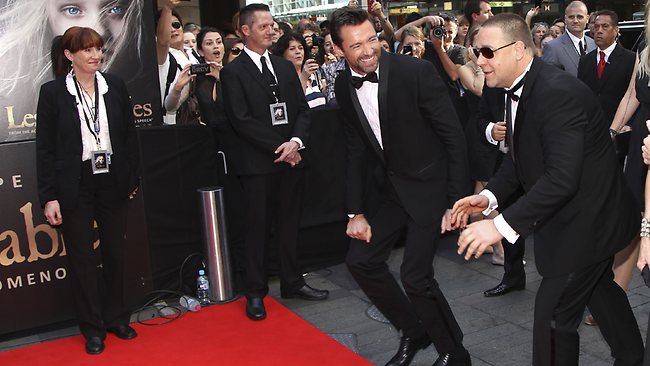 By Jonathon Moran
The Daily Telegraph

IT is the Aussie bromance that is taking the world by storm, cinema by cinema.

Hugh Jackman and Russell Crowe triumphantly hugged and soaked up the atmosphere as they celebrated the Australian premiere of Les Miserables Friday night.

After a whirlwind of events across the globe, including stops in New York, London and Tokyo, the red carpet event at the State Theatre was the final opening before the musical blockbuster hits cinemas around the country on Wednesday.

“This is our last stop on the promotional tour and it makes it all the more special that it is here at home with my family and friends,” Jackman said.

His good mate Crowe added: “What you see here is a friendship that has developed over two decades and a respect and understanding for what each other brings to their craft. That doesn’t get the fine point on it until you get on set and work together.

“Hugh led a very complex group of actors through their paces and put an example before them every day.”

Joining the two co-stars in Sydney for the lavish soiree were director Tom Hooper and producer Cameron Mackintosh.

Director Tom Hooper, who won an Academy Award for The King’s Speech, says Jackman deserves an Oscar for his extraordinary performance.

“Hugh is an old fashioned movie star who can carry a picture until the end,” Hooper said. “Hugh has the Aussie relaxed demeanor, he is a relaxed jokey guy to be around, which doesn’t give away the depth of his sensitivity.

Crowe also backed Jackman, who has been nominated for a Screen Actors Guild award and a Golden Globe, for a gong .

“As an Academy Award winner previously and as an Academy member and voter, he’s getting my vote,” Crowe said.

Nominated for an Oscar last year, fellow Aussie Jacki Weaver, said: “I saw the stage show about 20 times. It will be wonderful, they couldn’t miss with this cast.”