Les Misérables confirmed to open in Singapore in May 2016! 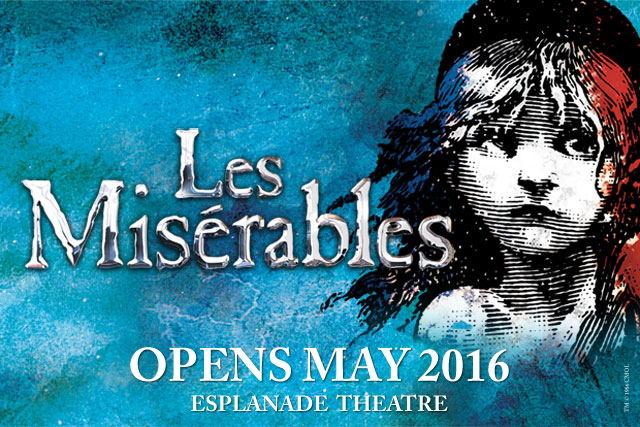 Shaun Seow, Chief Executive Office of MediaCorp said “MediaCorp, through our live entertainment company VizPro, is delighted to be presenting Cameron Mackintosh’s much loved musical in Singapore. We have a growing audience for world-class theatre who will no doubt be thrilled by this new version of Les Misérables, one of the most enduring and galvanising pieces of theatre in the world.”

Having celebrated triumphant seasons in Melbourne, Perth and currently playing in Sydney, Cameron Mackintosh is thrilled to bring the production to Singapore.

“Next year will mark twenty years since Les Misérables was last in Singapore, and I am excited to now be bringing the new production to the Esplanade, which has proved just as successful all over the world as the original production that has just celebrated its thirtieth anniversary in London – the only place in the world where you can still see the original production. Having created my new production over five years ago to celebrate the twenty-fifth anniversary of Les Misérables, it is now in its second year on Broadway, and broken box office records across America and in Canada for over three years, with separate companies in Japan, Korea, Spain and of course Australia, where it is sweeping all the top awards. I am delighted to bring this hugely successful new production to Singapore with this incredible cast.” Cameron Mackintosh said.

Playing the iconic role of ‘Jean Valjean’ is established actor and musical theatre star, Simon Gleeson following his recent and prestigious Australian Helpmann Award win for the role. Valjean’s lifelong antagonist ‘Javert’ will be played by Earl Carpenter, direct from his performance of the role in the Broadway company of Les Misérables, having played the role previously in the UK and Toronto. Joining them will be musical theatre stars, Patrice Tipoki as ‘Fantine’, Kerrie Anne Greenland as ‘Eponine’, Chris Durling as ‘Enjolras’ and Emily Langridge as ‘Cosette’ who come directly from performing the show in Sydney.