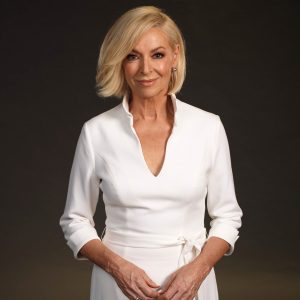 For all of her working life Liz Hayes has been a journalist.

Her career has traversed the wide landscape of media including newspapers and radio but predominantly, television.

For ten years she was co-host of the Australian national breakfast programme, Today, and hosted special event telecasts including the Winter Olympics in Lillehammer, Norway.

Liz is now a senior correspondent with Nine’s 60 Minutes television programme, a position she’s held since 1996.

It’s a job that has required reporting on some of the world’s most important stories in some of the toughest locations; from Afghanistan to Turkey, Pakistan, Iran, the Arctic Circle, and just about every country in between.

She has interviewed world leaders in business, sport, entertainment and politics, and covered a diverse range of stories including US presidential elections; the human horror of the Syrian refugee crisis; the devastating earthquake and tsunami in Japan; America’s nuclear conflict with North Korea and the aviation crisis involving Boeing’s disastrous aircraft, the 737 Max.

In Australia, Liz’s stories have delved into sensitive and sometimes confronting subjects.

Stories like that of Jeni Haynes, who developed thousands of personalities to cope with deplorable sexual assaults by her father; Kylie Monaghan, who despite her fast moving terminal illness, continued to campaign for the legalising of euthanasia in Australia, until the day she died; Dan Jones, a young man gaoled despite being wrongly accused by his fiancé of rape, and 24-year-old Sarah Ristevski, the daughter who was placed in an impossible position when she learned that the father she deeply loved killed her cherished mother.

Liz produced and presented an award-winning documentary ‘The Greatest Gift’, telling the story of heart transplant patients, as well as a two and a half hour television special on Sydney’s Lindt Café siege, in which eight of the hostages spoke exclusively of their terror the day they were held for 17 hours by a lone gunman.

In 2021, Liz will have spent 40 years working as a reporter and presenter for Nine Entertainment.